Friday afternoon the Centennial High School Spartans celebrated the 1,000th Career Point of Senior – Zachary Bolf. Zach is the 3rd member of the 1K Career Point Club, placing him in the company of Logan Dixon and Anthony Hunter. Along with his 1,ooo-points Zach has also snagged over 600 career rebounds and is on pace to break the school’s single season and career rebounding records, further elevating himself upon the upper echelons of the Spartan Hoops Program’s greatest to ever wear the uniform. 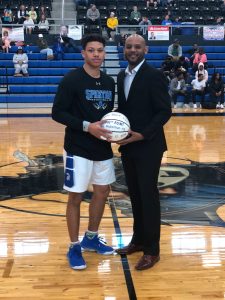 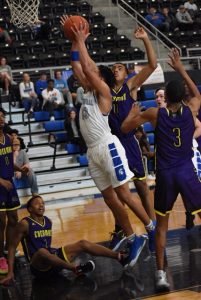 Amidst the celebrating of Zach’s incredible accomplishments marked the open for District 5-5A play for the Spartans of Centennial High School and the Bulldogs of Everman High School as well. This contest saw the Spartans emerge with a narrow home district victory 55-48.

Spartans opened the game on a tear, swarming defensively and looking like they have not missed a beat from their MT Rice Championship game, as they jumped out to an early 1st Quarter lead of 20-5. Led by Senior – Missouri Southern signee, Keryn Collins, the Spartans looked as if this was going to be another blowout home game, but the pride of Everman made it a dog fight. 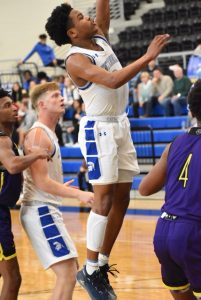 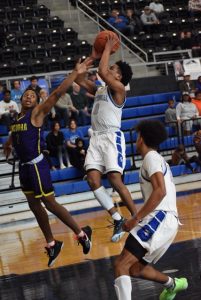 Everman’s game plan became very clear and very effective when they decided to really load up and pack the paint against the Spartans, making it extremely tough for the Centennial guards to get feet in the lane without extra bodies, hands and feet of the Everman defenders shadowing, tipping, chipping and swatting the basketball. The Bulldog’s pack-line tight defensive style took away driving lanes but left open Spartan shooters and the well was very dry in a 2nd Quarter that saw the Spartans score a season low of 3-points in the quarter. The Spartan defense remained firm and saw the Spartans going into halftime with a 23-8 lead.

Returning from halftime, Everman came out on fire and the Spartans came out flat. The Bulldog defense caused several turnovers and an incredible amount of frustration as they started the quarter on a 20 to 8 run. The Spartans visibly frustrated by their offensive slump, saw a 15-point lead dwindle fast. Centennial’s frustrations escalated even more in the quarter when missed layup opportunities started to pile up, leaving 8-points in missed layups on the floor in the quarter. Ending the quarter with a slim 2-point lead, 33-31, the Spartans seemingly survived the Bulldog surge.

The 4th Quarter saw the Spartan’s offense wake up and the pace pick up as the contest went back and forth but saw the Spartans grab a hold of the game and extend their 2-point lead off of Freshman – Phillip Hamilton’s two big three-point shots late in the quarter, eventually clinching the game and victory 55-48. 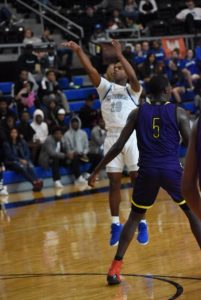 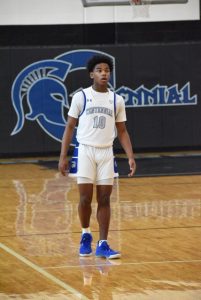 Centennial improves their overall record to (17-4) and starts District 5-5A (1-0). The Spartans will be back in action on the road Tuesday night, January 7th at Granbury High School at 6:30pm.