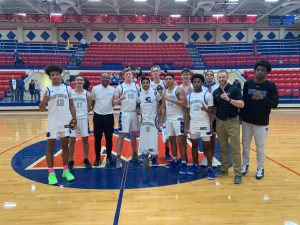 On Thursday, Centennial had a strong early tournament test in 6A #20 Austin Anderson 77-66 and found a way to get a gutsy come from behind Overtime win in the 2nd game of the day versus Grapevine by, 91-89 to put the Spartans in the Gold Bracket quarterfinal against 6A-Mansfield Lake Ridge.

On Friday, Centennial had another set of tough games as the Gold Bracket round of games began versus Lake Ridge high school and saw the Spartans get a win over the young and tough squad 78-64. With the win the Spartans advanced to the Gold Bracket Semifinals to take on the tournament host and 6A #24 – Waco Midway.

In the semifinal contest, it saw the Spartans jump out to an outstanding 12-0 lead and the Spartans never looked back as they controlled and led the entire game eventually winning 68-56 and moving the Spartans to the 59th Gold Bracket Championship of the tournament versus 6A-Pflugerville Hendrickson.

On championship Saturday, Centennial came out and controlled the flow and pace of the game from the tip against a very physical, athletic and big Hendrickson team and claiming the title 66-47. The Spartans dug deep and put on their most impressive defensive effort really making it hard for the Hendrickson team to get many open looks.

With the championship win, it marks the Spartans 2nd 1st place tournament finish of the 2019-2020 season and moves the Spartans to 16-4 on the season and closing the decade out in impressive fashion.

Centennial was led by its big Senior-4 (Zach Bolf, Keryn Collins, Tayton Conerway, and Jacob Stuckey) all of whom averaged double figures for the tournament: 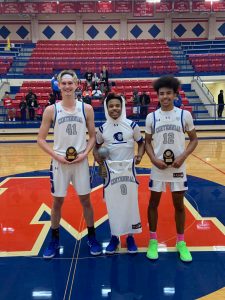 The Spartans will open District 5-5A play versus the Bulldogs of Everman High School at Spartan Arena at 12:30 p.m. on Friday – January 3rd, 2020.