Burleson High threw the first punch in the 1st-Quarter as they took an early 7-point lead. At what seemed that was going to be a real uphill battle, the Spartans responded with a barrage of quick three-pointers made by Anthony Hunter, Tanner Harbin, and Jacob Stuckey. That spark was just what the Spartans needed to really heat up and the defense followed. Spartans defense intensified and they closed the half on a 23-9 run and leading at halftime 41-24.

The Elks in a city rivalry game were not going to lay down and make it easy as they came out in the 3rd-Quarter very aggressive and quickly cut the lead and the game went back and forth as both teams exchanged baskets. Centennial’s offensive balance proved to be too much in the end as they concluded the rival sweep and move to 21-8 overall and 8-3 in District 5-5A. 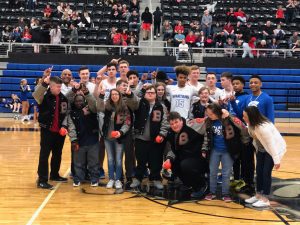